Coffee With A View: The Time Is Now 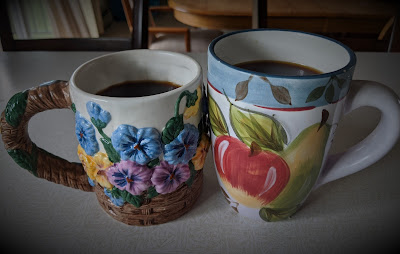 Hello, Coffee Pongers! I love to read my friends' Facebook posts on current issues and events. Sometimes I comment, sometimes I don't...
I recently posted a Candace Owens video on my own Facebook wall, and didn't expect anyone to comment or message me about it (a hot topic). It's been very tough being a Moderate these days. But my beautiful friend, fellow musician, and thoughtful writer, Lisa Montes, recently posted something on her own Facebook wall that sparked a response, and I wanted to share it with you all this weekend.
Thank you, Lisa, for putting up with my rants du jour! I love and respect the heck outta you, too!
____________________________________________________
Lisa:
"Trump... Candace Owens... people praising and supporting both...
I am disappointed with both because of how they choose to speak about important human values and humanity issues (often times with great callousness and condemnation towards populations and people, and seeds of prejudice or words that elicit that in others,) and I am disappointed with those that praise them and praise people like them who choose division over unity.

Everyone has the right to their opinion and beliefs, yes. And this is mine.

So many people just missing the point about true injustice and the history of racism and inequality and brutality that has lived and breathed and been acted upon for years upon years and is perpetuated and encouraged by people like these public figures with their words 😔... and then inevitably domino effect trickles down and is spread by those who support and believe in the same words these two speak... whether intentionally or not, it spreads. I just can’t...😢

Races and cultures cry "Injustice!" and march, riot and murder...yet there is a truth that no one wants to deal with, and that is: Too many do not look inward. Too many use "injustice" as an excuse and not a spark for solutions. Too many watch Corporate media for their position on prejudice and racism. On the Wind River Reservation, I tend to observe those who are silent more than those who are in protest. Why? Because I know of the horrors every single DAY that our EMTs and Paramedics are called to...Native AND White! The media doesn't actually "see" the abused babies and children. The media doesn't actually "see" how women are treated by drunk, high Native [and white!) men with fists, knives and guns. No, they can only speculate and empathize. Then the media spins and influences, left or right to appease their advertising bases; the public blindly swallows their pills.

The public and voters DO choose the wrong people to put on pedestals! Several.bad apples...even just ONE...can ruin it entirely for EVERYONE. How are true, solid solutions supposed to be put into play when African Americans ignore the wisdom of Martin Luther King, Jr.? When Native Americans ignore the wisdom of their ancestral chiefs and their Elders who actually experienced abuse and injustice, first-hand? When Native American Tribal Councils themselves reek with alcohol, drugs and corruption? When so many white folks glorify a "Resident" that openly embraces a Nazi-like character [and] "values"?

No...it's not about what is unjust. It is about what is TRUE! And no one wants to deal with the TRUTH and admit they very well may be a part of the problem than the solution. That's why we are where we are, time and time again...in protest, riots and murder. That's why the problems of injustice never get solved. No one wants to look in the mirror and say, "Am I a part of the problem or the solution...and what is the best approach to SOLVING the problems and contributing to the solutions?" Because we don't vote for leaders who are true and just! Because no one actually reads and studies their voter handbooks, they just get on bandwagons and blindly follow their party choices. They are easily persuaded by corporate media and some random Facebook posts. Marching and rioting has been historically proven to be UNproductive. Not a solution anymore. It has been proven to make things worse; not better. I'd rather actively focus more on those who bringing peaceful, positive solutions and make a difference for the cause of [what has apparently become a matter of] human survival. They are out there. (Thanks for letting me rant on your page!)"

I hear you and I respect you.

I think you speak and feel the emotions of so many of us who are frustrated in so many areas of what is happening in the world and to people.

And you’re right, there is a lot many of us don’t see or have access to so we may miss a portion or half of the story or miss it entirely if it’s not put in our focus.

Frustrations produce anger, and if used correctly anger produces desire for change and action - hopefully in the positive sense.

I think precisely because so many are ready for change and vision and justice in all these different areas, we are all expressing ourselves and taking the actions we see best to use.
Are our efforts always fruitful? Perhaps not always in the way we wish, but they are efforts and first steps, and they are evoking discussions and thoughts and actions towards positive change.

People who don’t feel heard or seen...want to be heard, seen, and counted when decisions are being made on their behalf or that affect them and others. So efforts are now being made by many in all ways and methods and directions to make that happen.

These are challenging times and if we are being completely honest with ourselves they always have been challenging times... we simply have not done the intrinsic and external work to truly always learn from them and make change. The time is now. ❤️

Posted by Carol Harper, Community Media at 9:17 AM