Coffee With A View: Make No Excuses, and Rise Above 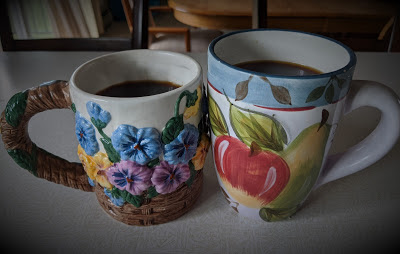 So today's "Coffee With A View" comes from an exchange on a childhood friend's Facebook wall. Let me tell you a bit about Cody...
There are several people in my lifetime that I have admired because of their astonishing beauty. Cody is one of them. I've known her since grade school, and one of my fondest memories was when we partnered up for Mr. Breen's photography "class". I think I still have some old black-and-white photos from that...I don't know, I'd have to dig through some boxes. I know I have a few...
When you're a kid growing up in a small town in one of the most sparsely-populated states in the Union, you are [or at least, appear to be] wild and care-free. That lasts for a time, and then, as a teen, it's the age-old story. You feel awkward, geeki-ish...hope to find some sort of "acceptance" in some sort of clique or crowd. I've always been a music nerd, so along the way, it was inevitable that our "crowds" would separate. But also along that difficult "Teenage Wasteland" way, there were those who would gossip, backbite, look down their noses at me...be a total and complete bitch to me. I very well know I was the brunt of not all, but some of it...however, there were a choice few in high school who never did that. Cody was one of them.
Being back home now, some things have changed, but I've run into just a few local "Riverton Lifers" who think they're still back in high school, suspended in time. The thing that is most refreshing for me is to see classmates all over the country, all over the world...living their own Journey...the rises and falls, the falls and rises. The trials, challenges and tribulations. The losses accounted for, but the amazing wisdom and strength gained.
Cody is one of them...and I thank her for, still...after all these years, being a part of my life.
Cody:
"So sad that this great country is literally destroying itself. Now we want to rewrite history on top of it. I'm sorry, but every single American has the same opportunities upon birth. It's up to each and every individual to grab that American dream and take flight. It doesn't matter what color your skin is, or even what social class you're reared in. Make no excuses and rise above. I want PEACE above all else."
Carol:

I was just listening to a song that had the phrase, "If wishes were horses, then beggars would ride..." I didn't understand how profound that phrase was until I read your post. I believe it takes a lot of work to make that "American Dream" come true. Unfortunately, we have several generations who have been raised to believe that they can just get a free ride on the work horses. At the same time, there are those who have been raised in privilege (regardless of race) saying: "Let them eat cake." and have no clue or understanding as to what it means to be homeless, destitute and looked down on because of the color of their skin. Myself? I feel as if I've lived a thousand lifetimes in my meager [almost] 54 years, and Life has always come down to choice. Decide what you want to do, and what kind of person you want to be...and then do the work to achieve it. No one else is going to do it for you...and there is no shame in asking for help, as long as the goals and objectives of the Dream is clear to both giver and receiver. Two (or more) heads are better than one!

But to "force" our government(s) and work horses to continually give and give without oversight and responsibility is insane and it only sucks the Life out of everyone! Then it's no longer a dream, it's a nightmare. Also...where are the corporate churches and "ministries" that take and take tithes and offerings...for what, a "feel good" sermon, inspiring music and pat on the head? The poor are still among us...and according to Jesus, always will be (John 12)...so what wisdom does the poor have to impart? I think it would behoove us all to at least finally listen and understand. Thanks for letting me comment...Miss ya!

Posted by Carol Harper, Community Media at 8:10 AM