Today's iced coffee is in a glass given to me by my son a while back. You can't really see it, but reads: "US Marine Corps 2007 Anniversary."
The perfect drink on a warm day! 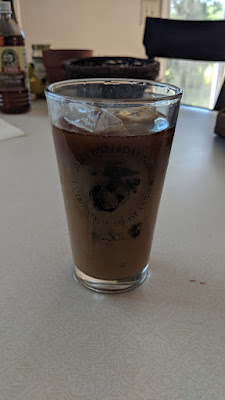 A while back, I saw a post on a good friend's Facebook wall that (for the most part) read: "Speak your truth."

I used to be very much afraid of both living and speaking "my truth". Not many are granted the liberty to explore it. I can honestly say, I didn't "know" my truth in my younger years. I let religion, politics, family and "friends" define everything for me. I allowed people to  "guilt" me into believing things I truly, in my heart and soul, did not believe. I was too agreeable...too accepting, too "nice", too naive....defined as a "sinner" in need of saving. A lone wolf, wanting and waiting for acceptance.

Today? I think about what my Mom used to always say: "I don't give a damn about what people think."

Defining and speaking one's truth takes a lot of work. A lot. However...living one's truth also takes a lot of courage. It's like that ol' "high school" mentality...no one wants to be seen as the "nerd", the "weirdo". Back then, I thought I was pretty safe, immersing myself in my music, but I very well knew that, at school...the popular crowd defined life for everybody else. The "pretty" ones. The jocks, the cheerleaders. The over-achievers., the under-achievers, the "middle"-achievers. The "losers". Succumbing to the fads and fashions, not because you liked them, but because everyone was doing it, wearing it, trying it, smoking it, drinking it...peer pressure is a very real thing, and can prevent one from really living their own truth.

Eventually, we grow up and {hopefully) mature enough to realize that life is not "high school" anymore. You come to understand that the planet is a much bigger place than the little world you were raised in. Don't get me wrong; I have no complaints about my upbringing, but I completely admit that I was very naive about many, many things. Out of the proverbial frying pans and into the fires of life, I also remember other words of wisdom of my mother: "If you don't learn the easy way, you'll have to learn the hard way."

I think the significant word here is "learn". You can gain a lot of knowledge, get your diplomas and degrees, gather and retain a lot of data and information..."Google" and "Wiki" everything...and still be very ignorant about many things. You can identify with, feel for, and rally around...but you cannot speak a truth about something you have not actually lived.

This is a crazy time we're living in, where we are bombarded every day by the media/social media with stories we don't necessarily know are true, but "ring" true and may pull on our heart strings. So much "peer pressure" to join a political party, special interest groups, marches and protests...drawn to "bigger, better, faster". It's difficult to really believe in something when history lessons prove otherwise, hypocrisy proves otherwise, "karma" proves otherwise...time proves otherwise.

Ah, yes. Time. It can be such a game-changer. Many know that I wrote a book a while back...wrote articles for "Plain Truth Magazine". It was a time in my life where I was still seeking "my truth", but looking back, it was also a time where I was very hurt, angry and bitter about many things. As I reflect upon what I wrote during that time, I can totally see where I struggled to find my truth, how there were bits and pieces of that truth revealed in my writings...but I could also see how I was influenced by others' "truth", which were anything but plain. It wasn't until I wrote a controversial article where I actually spoke my truth, but it also got me kicked off of Plain Truth's International Board and they no longer published my writings. I think that was the first indication in my life where I realized that many don't really like any truth outside of their own. One person's truth truly can be another person's lie.

And I get it. Sometimes the truth is hard to hear or acknowledge, and there are reasons people build up walls, turn a blind eye, get defensive. The truth can hurt. But I'd rather know the truth and hurt for a bit of time, than be content to believe in, defend or live a lie and allow it take over my life, my peace, my joy, my sanity.

We choose what we take into our bodies and minds that can help, heal...or hurt. I don't subscribe to any religion or political persuasion these days, but if your beliefs help you, I'm not going to say that they don't...unless and until they hurt others. That's where I draw the line. When beliefs begin to divide and hate, abuse and segregate...there is some examination and soul-searching that needs to be done in order to find out whether the "truth" that is believed really is.

I often think about the story of the "Emperor's New Clothes", how it was a little child who finally spoke up: "But he hasn't got anything on!"  So many have the gift of the silver tongue, and can convince anyone of anything...make it sound good, make it look good, make it believable.

Americans have freedoms that not many countries of the world enjoy...but when we start behaving as if ours is the only way - the only truth - we set ourselves up as prideful hypocrites, because the truth is, America also has many, many problems. And while we often try to defend our thinking, our logic, our convictions, thinking ours is the greatest, the biggest and best...the core truths that reside within our own consciences will constantly nag at us. Dress it up as you will, polish it up and put on a nice show...but deep down, we very well know what is right and what is wrong. We know the difference between what is good and what is bad. Winston Churchill once said: "I no longer listen to what people say, I just watch what they do. Behavior never lies."

So be good...be nice...be strong. Be good; don't be bad. Be nice; don't be mean. Be strong in living your truth. Build a life surrounded by the nouns (people, places and things) that make you a better person, inside and out. Elect leaders who actually walk their talk. Support causes that help and heal, not hurt and divide. Seek for truth, and once you find it...live it.

Posted by Carol Harper, Community Media at 9:48 AM