I love my road trips, and most of my travels lately have been to Utah or throughout my home state of Wyoming. As the weather [finally] warms up, I plan on embarking upon my "Wyoming CoffeePong Tour 2019", stopping at scenic views, visiting natural and historic landmarks, visiting friends and family, catching some live music here and there, and of course...visiting coffeehouses and roasters all over the state. Itinerary to come out soon, so if I'm in your town, let me know! I'd love to catch up.

This morning I'm kicking back with a nice French-pressed, espresso-grade, caramel-infused cup o' joe. My poor French press had been sitting in the corner as if to say, "Pick me! Pick me!" as I've always reached for the cone for my morning coffee these days. So today was "French Press Day", and I think it's happier now. Been saving coffee grounds for my gardening, so every cup has had purpose. 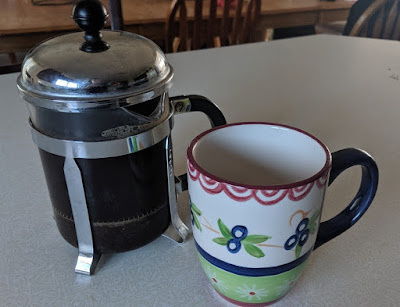 Not many know the story of how I came to be back home in Wyoming, after 30 years in California. The short story is one that is frequently told these days: 1) Affordability. The cost of living had become too way much to bear. 2) A sustainable wage, income to expenses. Budgeting every dollar for bare essentials...rent, utilities, phone, Internet and food...added to the daily.weekly/monthly stress. When just rent alone sucks out over 3/4 of your net monthly income, all you're doing is surviving, not living. And 3) Politics. As a news blog editor who has done her very best to keep ACN non-partisan and politically neutral, I got hits from all sides, not just left and right. It got to the point where I had to cut blog writers, deal with finger-pointing partisan whiners, and pressured to either join the lemmings of the elite, or stay true to what community media is all about. Everything had a protest; everything was a protest, a march, a complaint...and if I didn't appear as progressive on either side, then I must have been for their opposition. I was called a "fence dweller", a "milque-toaster". I lost advertisers because of gossipers and backbiters. But I've stayed true to who I am, and ACN is still going strong, even with me here in Wyoming. Those who truly understand and embrace the concept of community media and the "common grounds" are still loyal readers and Supporting Advertisers. And I thank all of them, from the very top and bottom of my heart.

Back to the California exodus...I had been living in Sacramento with a significant other, making the commute from Sacramento to Amador County for my Music Director position at Trinity Episcopal Church...there and back again for five years, a two-hour round trip commute. Eventually, my supplemental, long-term temp job in Sacramento came to an end, things went sideways in the "relationship" (if you could call it that)...so I returned to Amador, renting rooms, desperately looking for a supplemental job that could help make ends meet. Two of the landlords I encountered were not "all there" (okay, they were nuts)...the last straw was when I had moved all of my stuff into a new place, and then the landlord kicked me to the curb. Then, he posted rent for the room for $200 more than what he asked of me...which is illegal. I filed a police report, but nothing was going to be done about it, and I knew it.

So...for a few days, I was homeless. I lived in my car...sometimes slept in my office at the church. Ironically...I became a "client" of the Interfaith Food Bank. I say "ironically" because I used to be a volunteer there, and remembered the housing market crash in 2006-7 and we'd have BMWs and sports cars parked in front, folks dressed up in business attire, applying for food boxes. It was a harrowing moment to realize that I, myself, had become a statistic as well.

One night I was updating Amador Community News (ACN), and also arranging the music for Sunday's service...and I just broke down. I was sobbing and sobbing, when I heard the little familiar "ding" from a Facebook friend. I don't remember how the PM conversation actually started, but I do remember her asking me how I was doing.

At that moment, I could have said, "Oh, I'm great! Everything's fine. How are you?" But what good would lying do? What have I ever really achieved with my pride standing in the way? I hesitated for a bit, but my tears and guts were all over the desk at the time, so I told her:

She immediately said that she and her husband were going to help me get all of my stuff off of the [crazy] landlord's property and I would live with them in their guest room. "We'll figure it all out later, we just need to get you outta there." And we did. They did.

Not only did my decision to move back to Wyoming come during that time, but also an epiphany of honesty came to light. Telling the truth, no matter what, might be a difficult thing to do...but I've learned that there are angels out there who are waiting to hear it, and ready to take action when you cannot, and your strength has been totally drained. I completely admit that I was blinded by my circumstances and weakened by my pride. I often wonder what would've happened if I chose to say: "Oh, I'm great! Everything's fine. How are you?" instead of telling the truth.


I called my Dad and told him the truth. We made arrangements for me to move back home to Riverton, Wyoming and live in my grandparents' home, which had been vacant for years. I found a great job within a month upon arrival. I still run Amador Community News from afar for the people of Amador County, California (that's the beauty of the Internet)...no longer with the stress of political pressure or persuasion...and it's never been better. My partners, RTV and Sierra News Bulletin, have been nothing but supportive and innovative.

Some don't believe in angels and miracles. To tell the truth, I don't, either...in the sense that they're ethereal, celestial creatures with wings and harps, or that miracles are simply coincidences that might be considered anomalies on the charts and graphs of probabilities. You know the ol' "You might be a red neck if..." series by Jeff Foxworthy?

I've been back home for almost two years. My life has come full circle, and I'm not about to discount any event that has happened, good or bad, that has brought me here. Everything that has happened in my life has brought me back here for good. So the very least I can do is be the kind of person for good. Help those in need...do good in the community...find that one thing that makes a difference. Paying it back, paying it forward...for good.

In a day where borders and walls seem like "good" solutions, I have a better idea. Let down your walls with humility, and make those tough decisions with faith, but more importantly, with honesty. Let down those walls of [false] security, and trust in your gut, with your smarts...but more importantly, with your heart. Not everyone can be trusted, and you don't want to bring chaos and drama into your own homes...but you know what? There are those who can be trusted, and there are those out there who need your help. So help them. Invest in them. Where before despair had set in...give purpose. Give hope. Like I did with my little French press this morning...

Be that angel that sets a course for good in this life on this crazy planet called Earth...for yourself and for others. For Humanity.

Posted by Carol Harper, Community Media at 8:32 AM