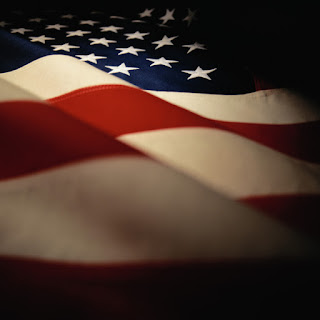 I shared a photo I saw on Facebook...a sign that read: "If you want to thank a soldier, be the kind of American worth fighting for." I added: "Amen. And worth dying for..."

On one of my first entries here on CoffeePong (a year ago),  "Remembering The Nouns", I included something I wrote years ago...a story about my time with the Tennessee Marine Family, and the night my son came back from Iraq. In it, I wrote:

"My son came home, alive and well. I cried tears of joy as I wrapped my arms around a big, husky young man who had been through and seen enough. But so many don’t come home in bus caravans with Camp Pendleton as their destination; so many come home in caskets with the U.S. flag draped over them..."

My Grandpa, Stephen Starks served in WWI. My paternal grandfather, Frank Quintana, was a pilot in WWII. My [birth] father, James Richards, served in the Navy in Vietnam, joined the Marines upon his return. On Memorial Day, we do honor our Fallen Heroes, but it has also become a day where we honor those who have served and currently serve. I used to think we should celebrate these military holidays with the correct designations...Armed Forces Day, Memorial Day, Veterans Day, Independence Day, etc...but today I was thinking about all of our troops, the living and the dead. Why?

Because I think about all troops who been in and experienced a time of war, and even though many have lived through it, survived it...throughout the years, a part of them has died. No matter what they did while in service...whether they were on the front lines, or a cook in the mess hall, behind a computer...a mechanic, an ammo tech, etc...even if they weren't deployed, they saw they're buddies come back in boxes...and a part of them dies. Something happens inside the human mind while trying to make sense of it all. Categorizing it or bottling it up is a temporary, band-aid fix, but the long term effects continue to haunt long after homecoming.

Many do come home, but it doesn't feel like home. They get a job, but it doesn't feel like their job. They say they're fine; hell, they might very well think they're fine. But they have trouble adjusting to civilian life, when all they knew was military life. They don't just magically "forget" what they've seen and heard, and many turn to drugs and alcohol to cope with that part of them that died.

I remember my son telling me that he was out in the desert at a base in the middle of nowhere. Water had to be convoyed in, and there were periods of time where they hadn't showered in weeks. I kinda joked with him about it ("Well, that must've been a wonderful smell."), but then I think about how I can simply turn on the faucet and there's clean water...take a nice hot shower any time, wash my dishes after a nice, hot, home-cooked meal, wash my clothes and make them smell nice and fresh, make my coffee with nice clean, cold water. Sacrifice comes in many forms, and though I know that there are many bases that are sarcastically deemed as "Camp Cupcake"...it's not the same.

It's not home. It's not America.

What kind of America is worth fighting for? I have been trying to define it, and quite honestly - in today's political and social climate changes - I am trying to find the words. When we are fighting among ourselves, hurting each other, killing each other, shutting each other out...the opportunities for our enemies to strike at our Achilles heels become more and more possible/likely. When we are so focused upon the red herrings and ignore the real threats...the lines between right and wrong, truth and lies...become more and more gray. When we build walls instead of bridges (where just one bomb could obliterate them all in mere seconds)...instead of life, liberty and the pursuit of happiness, fear becomes the norm. When we allow our leaders and judges to stray so far away from our Constitution, refusing to listen to We the People...we only accelerate the already-slow death that was predicted decades ago.

United we stand, divided we fall. We reap what we sow. How many more pieces of America has to die before we realize that the facade of being "great again" wears off and reality sinks in? And how many more troops have to die, defending that facade?

This Memorial Day, I hope we can realize the battles that exist in our own states, counties and communities, right here in America. I hope that we can stop the bickering among ourselves long enough to really open our blinded eyes and see those who are already hurt and wounded by a long history of hate, greed, war and violence that exists, right here in America. That we will truly remember those who made the ultimate sacrifice, and that those sacrifices have not been in vain. Their headstones are right here, in America.

I hope that we can make a difference right where we are, and stand...not fall.

On my CoffeePong Facebook page is a link to Green Beans Coffee's "A Cup of Joe for a Joe". Before you fire up that grill, donate a cup. It's just $2.50. You can afford that. I have over 2,700 "friends" on Facebook. That's almost $7K worth of coffee for our troops. It may seem like just a small thing, but...for our troops, it's huge, because...it's a little bit of home.


Posted by Carol Harper, Community Media at 7:59 AM