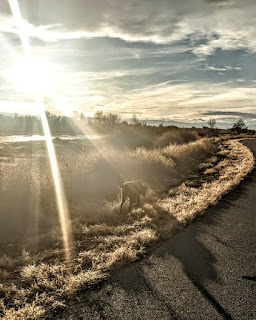 HAPPY EASTER MORNING! Yes, I do still celebrate Easter. My Christian traditions are still very much a part of who I am. The good traditions, I should say. As a Director of Music & Worship of several different denominations of Christianity,..one of my very favorite celebrations to prepare music for has always been Easter. "He is risen, as He said!" My ancestral Celtic roots (Welsh) meld with the hope and promise of Spring and New Beginnings; however, Wyoming's weather hasn't quite yet cooperated with that! LOL

Then again, you all know that I celebrate every day where I can watch the sun rise and set. I witness the buds on the trees; the grass really trying to green up. The robins are out in full force...the deer have their scruffy Winter coats and raise their heads above the tall, dry grasses and fields...

The photo is of my grand-puppy, Emma, on a walk by the Little Wind River. It was such a beautiful time of day, so I just started snapping photos of her walking along, sniffing everything. As I went back through the photos, I noticed the sun's rays on the river formed a cross. I've waited four months to post this photo!

I also call Emma my "little wolf". She's the best dog in the world and a little darlin'; I love her so very, very much. But I know that deep down, in her ancestral line - in her DNA - lies the wolf inside of her. She may be sweet, loving, very well-behaved and downright adorable, but...she's also quite the bad-ass! Yes, she sniffs the air and senses danger. Yes, the fur on her neck rises when she gets into protective mode. Yes, she has killed things. But she always knows who her pack (family) is.

We all have a little "wolf" inside of us. I have happen to have Three...a Red Wolf, a White Wolf, and a Brown Wolf. I was born a Red Wolf (Northern Arapaho) a Brown Wolf (Hispanic), and a White Wolf (Welsh), raised in a White wolf pack. I have come to embrace all Three Wolves in my Third Life, however...I can rightly say that all have been snarling at each other for a very long time...hungry to know which one of them will be "fed" by the Alpha of the pack: Me.

I was recently included in the Wind River Mutual Aid project, and created the initial stages of Wind River Community News. The COVID-19 pandemic has created many problems and concerns on the Wind River Indian Reservation (WRIR), so I stepped forward as a part of this newly-formed Pack and offered the one thing I could: Media and Communications. There are so many wonderful people out on the WRIR who have shed the politics, the prejudice and discrimination issues, and are ready and willing to offer their hearts, minds and souls for the betterment of the Tribes...willing to lay down their differences for the good of the entire Pack.

You know that ol' "United we stand, divided we fall" thing?Wherever you stand politically needs to take a back seat, and We The People of the United States need to support and help each other.Like a hurricane, tornado, earthquake, wild fire, etc. this pandemic doesn't care if your red, yellow, black or white, about gender identity, whether you're Republican or Democrat, Liberal or Conservative, Christian, Muslim, Buddhist, Atheist...We have the power to make a difference, right where we are.
So if you're trying to point fingers and place blame, or complaining about whatever is on the news du jour...take a moment to think about which wolf you are feeding.

I must say that it was my White Wolf speaking at that moment...and my Red and Brown wolves stood with her in agreement. Division, arguing, fighting, snarling at each other...will never be a solution to the harsh reality of impending Death.

So if there is to be hope, a promise...a Resurrection of Life...wouldn't it behoove us all to break down the walls that divide us, and come together as a True Pack? Wouldn't it be better to embrace Life and all that it promises to "all creatures, great and small"?

Don't get me wrong; I'm very sweet, loving, well-behaved, and yes...I can be downright adorable. LOL! However, I've survived this Journey long enough to have the senses and smarts to smell danger...feel the fur rise on my neck when I get into protective-mode. But at least I know who to let into my Pack...and I also know who and what will weaken it.

Trials, past mistakes, regrets...should not weaken or define us. They need to refine us. I believe that the Founding Fathers of the United States of America would be rolling over in their graves if they knew the kind of land and peoples that America has become...where the Nouns of Politics, Corruption and Greed rule and reign. Where Opportunists and Thieves suck the very life and resources out of us. Where Hypocrisy is rampant, and Falsehood drowns the truth. Many Wolves have died because of these Nouns. We are, again, living in a time where the very reason the Boston Tea Party...the American Revolution...happened. History has repeated itself, and it's time that We the People of every nation - every Pack - stand up for what is right and good...a true Resurrection of "all things bright and beautiful".

Happy Easter, and Happy Spring...raise the glass to a New Beginning! 🍷

Posted by Carol Harper, Community Media at 7:29 AM