The snowy, frigid Wyoming winter weather may keep me off the roads...cooped up, house-and/or ambulance station-bound...but I'm very much enjoying the cozy warmth of my home, snuggling up with a nice hot cup of coffee or peppermint tea, doing a Netflix binge...catching up on an E-book on Kindle...or, my very favorite thing to do:
Cooking! 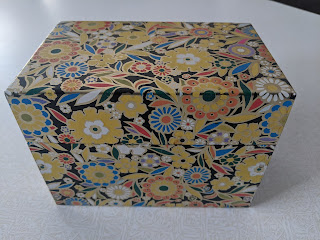 My first Christmas in Wyoming (December 2017), my brother, Mike, gave me the most precious gift. It was my mother's recipe box! He had saved it for me all these years, and as you can imagine, I cried and hugged him so tightly for keeping it in his care, especially for me. I didn't have anything of my mother's, so this gift was especially meaningful. So meaningful, that I decorated my entire country kitchen theme around that box. Reds, teals, bright yellow. Brings me great comfort and cheer!

This weekend, I started actually writing down my recipes that I usually just create and re-create by memory, "feel" and taste. When it comes to cooking (at least for me), there are no "rules". Recipes are but mere guidelines; I prefer to create my very own signature spice blends, seasonings and sauces. I've become quite the "kitchen witch" in the experimentation process. I think my love of the Indian/Hindu cuisine and culture has also caused me to be more "outside the box" on spices and flavors. I could literally spend hours at a farmers' market or international grocery stores. I do miss Trader Joe's, but I am always on the lookout for local stores that might carry the eclectic, unique items on my "crazy" grocery list!

As you can imagine, driving on ice and snow is a feat unto itself. If bad drivers are bad in dry weather, you know they're just as bad or worse in this icy "Wonderland" we call Wyoming. Common sense and courtesy seem to be not-so-common with those who think that, just because they have a 4WD "monster truck", they're invincible. News flash: Ice is, well...ice. You're gonna be slip-slidin' away like the rest of us. So the big test is the common sense of the driver, not the vehicle. I can't tell you how many times I'd be creeping along in my little Prius, and some huge ego trip decides to tail me. You know what? I don't want to have to tap my brakes and have you plow right into me and ruin my perfectly good morning...but if I have to, I will, and you better have good insurance because it will be your fault. Just sayin'...

There are rules of the road, all year around. It seems that our own anxiety levels have increased to compensate for the idiots who don't really seem to care. Sure, I'll make many exceptions for the elderly and proclaimed "handicapped", however...if they can't abide by the rules of the road, they probably shouldn't be on them, either. Going 35 in a 65 is just as inconsiderate and dangerous.

Then, I think about the rules of the Road of Life.

As you know, I have Three Rules for my own life's journey: 1) Be good. Don't be bad. 2) Be nice. Don't be mean. 3) Be strong, because life is going to hand you a lot of BS, so stand against the elements, stand against those who aren't good or nice. You got this!

However...there aren't merely some, but many who think the rules just don't apply to them. Or...they try to excuse or justify their bad behavior whenever and wherever they can. It could be the "law", it could be "scripture", it could be their own "unwritten" rules of the road. Doesn't mean we have to put up with it, but we often do. Why?

Because we have our own fears and insecurities. Doesn't mean we're weak; it simply means we don't know the truth or enough "facts" enough to make even the most basic of intelligent choices, because the truth and facts are so often kept from us. There are those at the top who think we serfs and servants "can't handle" the truth. We live in the Information Age, yet information is kept from the masses like the Dark Ages because most of the population of this little planet we call Earth is bound or content to be ignorant.

Therefore, no one really cares. This upcoming generation of "Millennials" laughs at our history, our past...and rightly so, they should laugh! Past generations - hook, line and sinker - have bought into the institutions of religion, politics and the media by those with the gifts of the silver tongue, the sleight of hand. Then, ultimately, we all find ourselves imprisoned in the land of the "free", home of the brave. When our very own President doesn't think he has to abide by the US Constitution's "We the People" Rules...we ALL find ourselves rear-ended. What message does that send to our youth, our future generations? That you can do whatever the hell you want, and no one will care because it's a free for all, folks. Do whatever you want, because accountability and responsibility is a thing of the past. Deception is king. Get a "good" lawyer. Don't worry, you'll get away with the school shooting, the embezzlement, the thievery, the drug deal. Pay no mind to the man behind the curtain. He's got your back, because he (or she) is, well...behind the curtain!

And yet, what is the cost? Ironically, freedom. Personally speaking...I would rather know the truth, than ever be content to live or listen to a ridiculous, foolish lie. Please...just tell me the truth! I can handle it. Let it be over and done with. Believe me, I've seen enough in my own life to know I can handle it. C'mon, corporate media...I can deal with the fallout later, I got this. But do not lie to me! I don't want an institution, a political party, a religion or church doing the thinking for me. I want to truly be free. But I will never be free if I'm lied to.

My Christmas wish...my New Year's/Decade wish...is that we can all gift each other with truth and love, regardless of race, color, religion, political persuasion or other biases. The human race is ONE tribe in an unknown Universe. We're just a blip on the timeline. Granted, the truth might not exactly be what any of us want to hear...and love seems to be just as subjective in a world of overwhelming lies, deception and violence. But those strong enough to understand, see through the crap and endure all of the fallout...will be the ones who will prevail.

As I do every year, this time of year...I wanted to share the duet of "O Holy Night" that tenor Matt Kohler and I recorded when I was in Nashville. Unfortunately, the "rules" of good singing didn't apply to me that night, as I was sick with a pretty terrible cold when we laid those tracks. Fortunately, Matt was in great form! LOL

Merry Christmas, all...and the Happiest of New Years and to a New Decade!